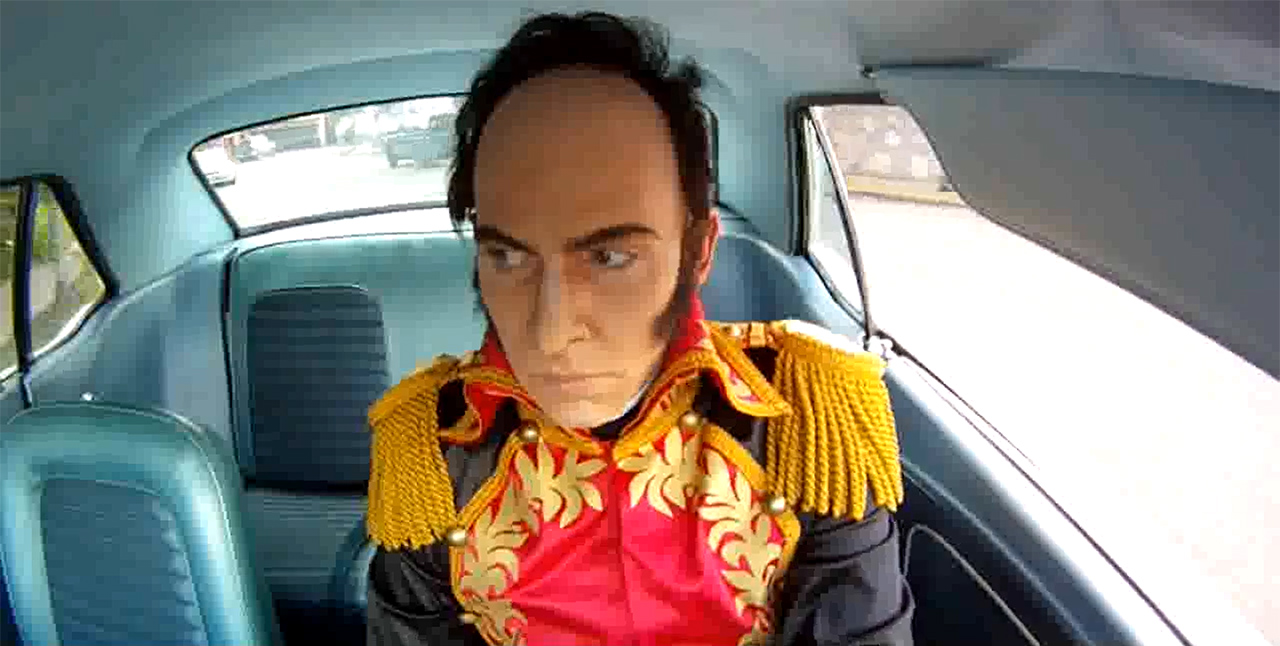 Act One: The Ballad of the Hero
There is no heroic deed without curating one’s own defeat. Just as it does not
seem conceivable a champion who should not retrace the erratics of his own
colossal steps; forced to discover the grimace in those magnificently useless
gestures that elevated him to the empyrean. KuZo, metamorphosed again,
assuming the quintessence of the Latin American heroic avatar, embarks on an
urban ballade in the purest two-sided sense of its double Occitan meaning: it drags
us on a transverse journey; (self) contemplative and ghostly, whose soundtrack is
composed of a sad ballad, as mute as it is filled with fury. It is not there, but we can
hear it. The hero in his performative journey, as a testimonial tool for the revision of
his lifeless glories; a sterile movement through squares, streets and markets,
where all that remains for him is to walk the diagonal of a square that bears his
name, under the inquisitive gaze of those who renounced freedom in order to
achieve a cruel gift. Simón Bolívar, driven by gasoline and blood, heading his white
Mustang straight into the jaws of a new and final betrayal; returning on himself,
trying to be redeemed, only to find as the narrator of a false undesirable eulogy to
be the main violator of his ideology, and finally, of his naked and ashamed
skeleton.
Act Two: The Desecration of the Hero
Apparently the severe prosthetic KuZo’s Bolívar has fallen into the trap: a shed of
lies and flags receives him, surrounded by dubious white puppets, pseudo
forensics red of soul and rage, hiding his identity behind a cowardly asepsis; eager
to build a sinister new imaginary from the marrow of his desecrated bones.
Thorough dishonor; cold and calculated violence, brokenness and transgression.
The dark buffoonery aspires, mutilates and records, exposing all traces of dignity,
not only from the figure of the hero, but of the already so withered idea of
Homeland that Venezuela has seen diminish during the last twenty years under the
aegis of these criminals. Nothing seems safe from so much damage, from so much
evil and concentrated stupidity. That anonymous skeleton invested with heroism is
not that of Bolívar: it is that of each of the Venezuelans, scraped and pierced by
decades of begging and frustration. Exhumed, incapable of any defense, the hero
surrenders his frame to the beat of a sarcastic hymn.
A short ending
Was the hero really there? The KuZo in Bolívar’s boots allows us to doubt: perhaps
he only witnessed being violated from the doors of his own pantheon, perhaps
only, disdainfully, he spat on the souls of those who tried to expose him. Or maybe
not. The vital desideratum of the hero exercises his free will as a last weapon to
stoically enter the alleys of his hometown, leaving open the possibility of a
metaphysical return that allows the restoration of the anima mundi of the
Homeland, of its igneous vertebra, of the necessary impulse to try to dream it all
once again, free now from spiritual slavery.
Sergio Márquez