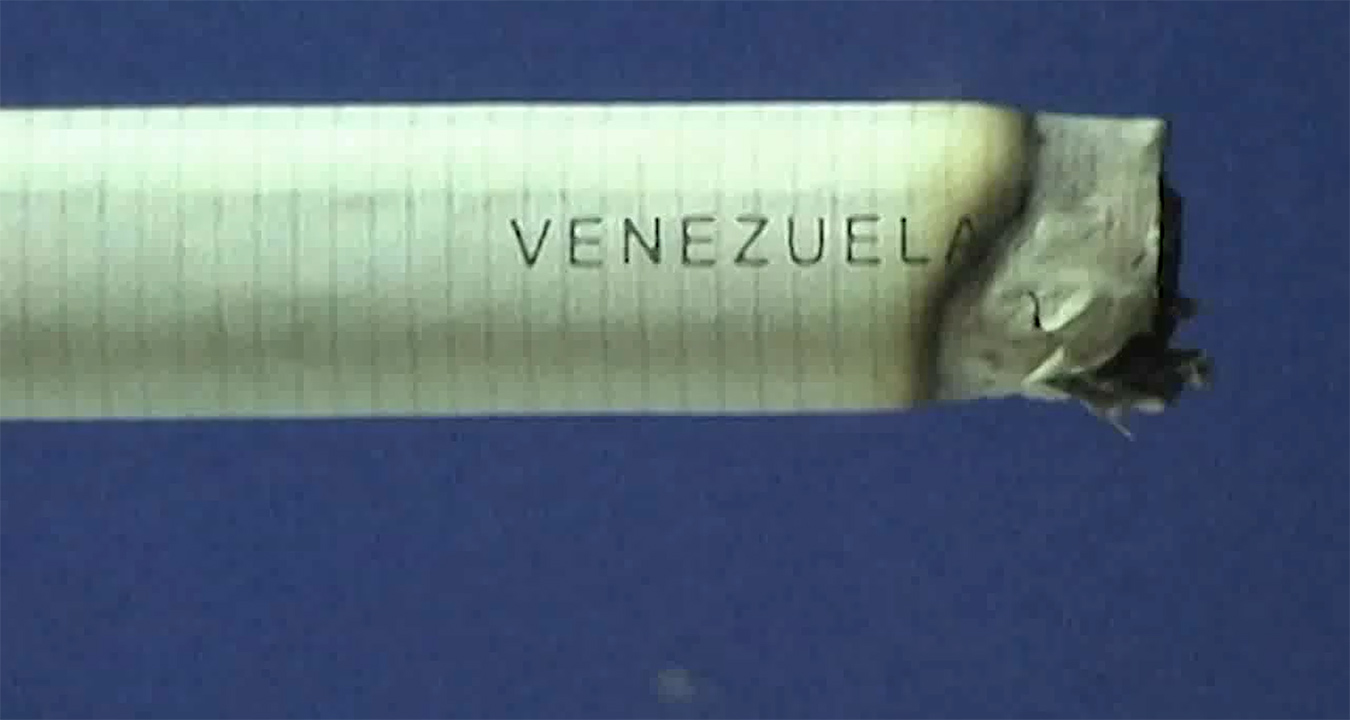 It burns. A Dantesque territory chars its cosmography from its own entrails, which are hell.
And KuZo knows it. Nobody sprayed a red fuel at close range and then threw a lighted
match to it. Nobody tied its hands and feet to a log and approached, slowly, with an
inflamed torch. That is to say, yes, all those perverse ignitions and many more of them
happened, but not in the way we would like imagine. For a nation to burn up in flames, fire
must come from its most intimate torment. Yes. Everything came from within. The
sulphurous spark and the pyre that does not stop; the incarnated fuel and the torch; the
flint that explodes in millions of slivers that burn everything whole. KuZo (as do those who
have been won by despair and seek answers in the face of desolation) light a cigarette to
let it burn. And, impassive, he films it: gradual, endless. A simple gesture. Pedestrian vice.
A (minimal) pleasure. Just smoke. But no. This cigarette is not a cigarette. This lean
cylinder is the axis mundi of destruction. A region of volcanic fireholes, anxious to make
combustion, does not need extrinsic arsonists to stir its flames. Like a salamander, she
hides in its igneous belly the magma of her own holocaust. Its end, an ember that cracks,
and that fiery cinder gives way to the larva of scoria that refuses to collapse; and it is
understood that the fire that exhausts it comes from its inner core, from the scorching
miseries that that country, Venezuela, hides in its foundations. And in spite of perceiving
that the ash itself is the primordial essence of what has been consumed, of its more
luculent nature (and of understanding that, precisely there, is where its enigmatic capacity
for resurrection lies), we succumb to the woodworm of not being able to suffocate its
ardent fate, thick with penitence and mourning. Unable to stop its ebbing involution
towards the inorganic, to the alchemical nigredo, trust in the need for the ultimate sacrifice
is the only thing we have left. We know that something must inevitably disappear (paper,
tobacco, names, land, lives) in search of the purifying metempsychosis. And under the
shadow of a (national) anthem, KuZo’s perpetual cigarette consumes itself, ineluctable,
and its ash conceals simultaneously an ephemeral, prophetic artifact and this sort of
infinite hourglass – perpendicular to the plane – filled with the scree of annihilation.
Emanates from it a premonitory smoke, which is nourished by each incinerated
character: … A … L … E … U … Z … E … N … E … V … And if there you were born, or if by
chance has corresponded you to deal with the paths of life in that mutilated country that
now does not even bears that name, with each letter that is absent something will also
burn strong inside you, charred by yearning, inextinguishable.
Sergio Márquez

Exhumed (from the Patria – Homeland series)